HeliNY wanted to highlight a few trailblazing female aviators. Some of them were born before it was even legal for women to vote in their country! It is a little known fact that Katharine Wright, sister of the famous brothers credited with the invention of the airplane, played a crucial role in managing their business affairs. She was also a fierce advocate of the Women’s Suffrage Movement.

Given the common misconception that women are less inclined to have an interest in mechanics, aviation has historically been a male-dominated field. HeliNY is proud to have had several female pilots over the years, and encourages girls and women to fearlessly take to the sky. Jessica, one of the HeliNY mechanics, making sure everything is in working order.

One of the women we are spotlighting, Valérie André, is the first woman to have flown a helicopter in combat. Born in France in 1922, she was an accomplished military surgeon by her late 20s. She learned how to fly helicopters in order to provide immediate medical treatment to wounded soldiers, and even completed two parachute jumps to perform surgery in an active war zone. André spearheaded the utilization of helicopters for medical evacuations and saved hundreds of lives throughout her years of service.

To learn more, check out Whirly Girls International, founded in 1955, which serves to promote women in helicopter aviation and even provides scholarships. 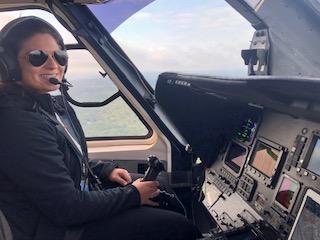 Cristina, one of our pilots, effortlessly gliding through the sky!

Do you know of any budding pilots? Buy them a HeliNY gift certificate so they can find out if they’d like to join a flock of whirly birds.

We would say the sky is the limit, but who knows? Maybe the first pilot to land on Mars will be a woman!

PREV POST
5 Things you can do for St. Paddy’s Day in NYC
NEXT POST
Botanic or botanical? Both!