Whether you are taking a quick trip to the airport or heading to the Hamptons for the weekend, a helicopter charter offers a quick, easy and comfortable alternative for travel in and out of the New York City area.

Helicopter Flight Services operates Bell 407 and 427 helicopters that give you a smooth, safe ride in a powerful helicopter without sacrificing the comfort of a spacious cabin that seats up to six. Our helicopters are all equipped with heat and air conditioning as well as a Bose stereo system to help you relax and enjoy the ride. Learn more about our helicopters.

Select a Service Below

Anywhere in the Northeast

We can take you anywhere in the northeast, quickly. Below are the average flight times for popular destinations departing from NYC. 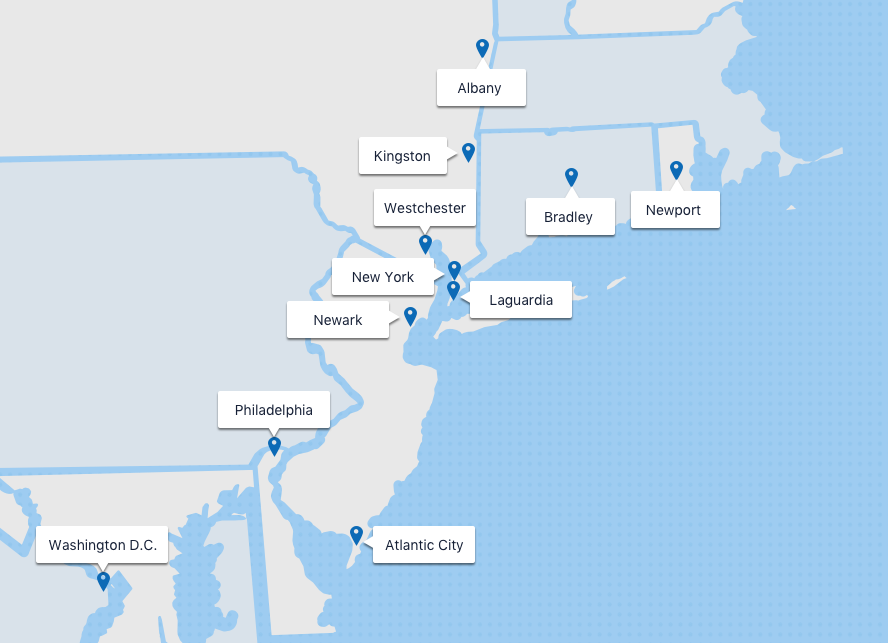 Our charter services allow you to travel in comfort and style anywhere in the Northeast. Whether it’s a weekend in the Hamptons, a commute into New York City from your local airport or a sightseeing trip to Niagara Falls our charter team can create a custom quote for you!

Why wait in New York City traffic when there’s no traffic in the sky. Airport Transfers by Helicopter can significantly reduce your travel time between NYC airports.

Driving between Manhattan and the area airports can take hours in unpredictable and aggravating traffic. Airport transfers by helicopter typically take less than 10 minutes giving you the extra time you need in your busy day. Airport transfers are available between Manhattan and the four major airports in the New York region as well as between each Airport. Complimentary ground transportation is available between the airline terminal and the helicopter landing area for additional convenience.

In Manhattan there are three different heliports to choose from:

Airport transfers by helicopter are available from / between the following New York area airports:

* All Airport transfers are private and start at $1,850

* Fees may apply for early morning and late evening flights, as well as flights that require additional crew.

Capture the perfect shot from above with our aerial photography services. Unique, head-turning images make a distinct impact when incorporated into materials for marketing, branding, real estate, museums, resorts and event planning to name a few. Your video/images will greatly impact your efficiency for drawings that are needed for completion, construction & architectural projects. For all of these services and more we provide custom options all over the tri-state area to meet yours and your clients expectations.

*Photographer and equipment not provided by HeliNY Let us do the heavy lifting.

HeliNY can help you get the job done. Our experienced pilots and ground crew will design a lifting solution to meet your needs.

Our aircraft has the ability to lift up to 1,700 pounds. Please call us today to discuss your project.

Contact us to plan your trip
Contact Us
LEARN MORE ABOUT OUR HELICOPTERS
Our full fleet sets the standard for helicopter flight.
SEE HELICOPTERS